Click here for delivery schedule.
Warning
Our new website is optimized for the most current web browsing technology. If you are using an older web browser, part of our website may not function properly as designed. Please consider upgrading your browser for an error free experience.
Volunteer Today!
Follow Us On 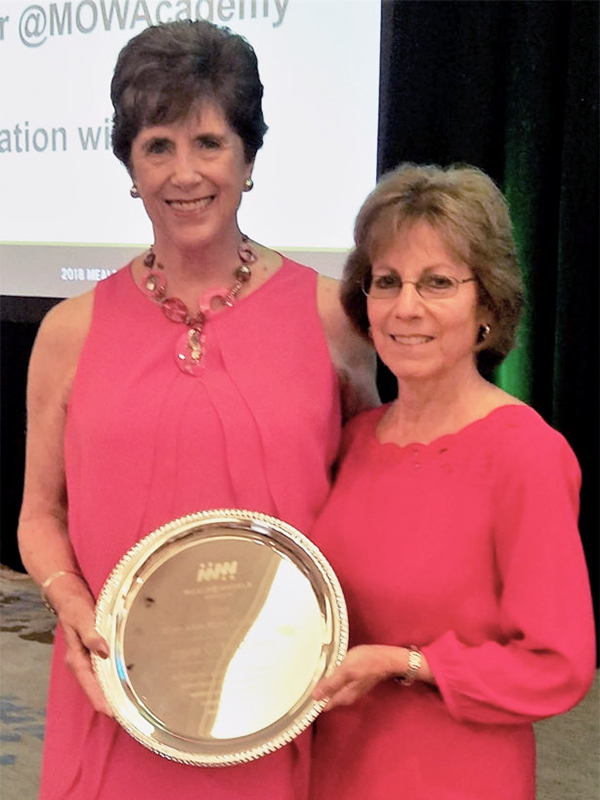 “For more than 41 years, Jayne McQueen has committed herself to serving the most vulnerable seniors of Spartanburg County, South Carolina with her whole heart, just as Sister Alice Marie Quinn did for the seniors of Los Angeles,” said Ellie Hollander, President and CEO, Meals on Wheels America. “I am thrilled to be able to honor Jayne for her visionary leadership and effectiveness, and her incredible contributions to the Meals on Wheels movement.”

“I am humbled to be honored with this special award that carries the name of my dear friend, Sister Alice Marie Quinn,” said Jayne McQueen, President and CEO, Mobile Meals of Spartanburg. “Her work was an inspiration to many and fed thousands of souls spiritually and physically.”

The 2018 Sister Alice Marie Quinn Award was presented during the Meals on Wheels Annual Conference and Expo on Tuesday, August 28, in Charlotte, NC, in front of leaders and staff of nearly 350 local Meals on Wheels programs from across the country.

For all donation options including honors, memorials, Circle of Angels and others please hover over "Donate" at the top. For general donations, click "Donate Now".

All donations are processed
on a secure server.
Give Now

Thank you for your information. We will get back to you soon.

Thank you for your information. We will get back to you soon.